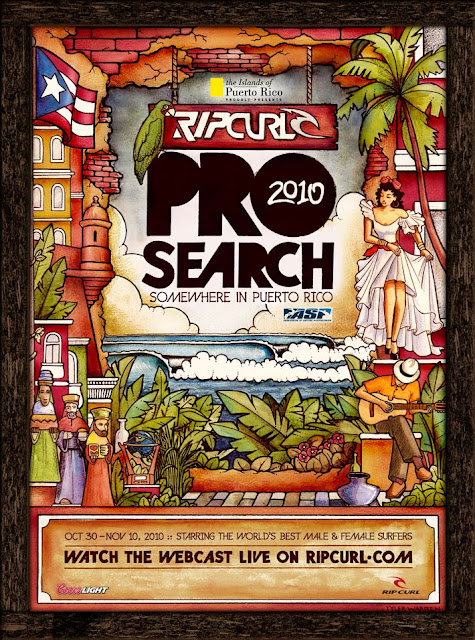 And this year's Search event will be in...in Puerto Rico! That's right, the mystery surrounding the location of the 2010 Rip Curl Pro Search has ended, with the international announcement that Puerto Rico in the Caribbean Sea will be the host country for the globally-mobile ASP World Tour event this October 30 to November 10.

For five years, the Search has brought a unique dynamic to the World Tour, with successful showings in Reunion, Mexico, Chile, Bali and Portugal. This year, the Carribean in late October will throw out exactly the sort of exciting curveball the event is known for.

"It's going to be interesting," said France's World Tour competitor Jeremy Flores. "I think the Rip Curl Pro Search is our most amazing event and every year we go to a special location and it's always exciting. I have never been to Puerto Rico, but I have a bunch of friends there and I know they've got good waves, so I'm looking forward to it."

One surfer who has experienced the waves of Puerto Rico is 38-year-old World Tour veteran Taylor Knox. "It's a great place to have the Search event, because we're going to have plenty of options and waves to choose from," said Taylor Knox, who finished runner-up at the 2006 Rip Curl Pro Search. "Rip Curl has been really good at picking places that have more than one wave option and I think it's great to do something new by heading to the Caribbean."

"Having an event in Puerto Rico is almost a draw to keep me on Tour all year, because I couldn't imagine having an event in my backyard and not being able to be there," added Kelly Slater. The nine-time ASP World Champion hails from nearby Cocoa Beach, in Florida, and knows the Caribbean waves well. "I have a lot of great memories of Puerto Rico - all the first wins I had internationally as a kid were there and I surfed a lot of contests there when I was younger. I'm looking forward to getting there."

Puerto Rico will be one of two new locations on the 2010 ASP Women's World Tour, with Taranaki, New Zealand being the other. The world's Top 17 female surfers are obviously chuffed to explore somewhere new this season.

"The Caribbean has always been a dream holiday destination for me and now it's clear they've got incredible waves there," said Australia's Steph Gilmore, reigning three-time word champion. "Clear water, sunshine, bikinis, palm trees, beautiful beaches - it's exactly where the Rip Curl Pro Search should be!"