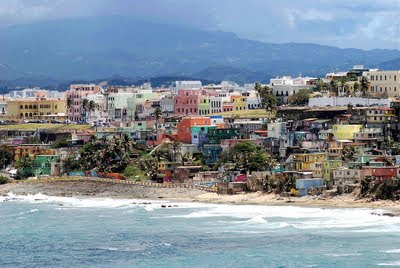 La Perla is a community aside of the northern historic city wall of Old San Juan, Puerto Rico, stretching about 650 yards (600 m) along the rocky Atlantic coast immediately east of the Santa Maria Magdalena de Pazzis Cemetery and down the slope from (north of) Calle Norzagaray.
La Perla was established in the late 19th century. Initially, the area was the site of a slaughterhouse because the law required them and homes of former slaves and homeless non-white servants – as well as cemeteries – to be established away from the main community center; in this case, outside the city walls. Sometime after, some of the farmers and workers started living around the slaughterhouse and shortly established their houses there.
La Perla population are mostly working class families.
on June 30, 2011